skip to main | skip to sidebar

“The Terrace scene in Wellington, an arty, vaguely nihilistic, vaguely decadent post punk scene unlike any other in the country.” Gary Steel

“The Terrace scene was so named because of the area of relatively cheap housing around which the people and parties moved, giving rise to a group of bands with similar musical taste and outlook. The scene began with ‘underground’ parties for the punk set, which began to feature bands, or just as often, jam sessions within a small group of like-minded people.” Wade Ronald Churton

“Wellington's emerging punk and post-punk scene made it's home in a couple of houses, (212 and 246 The Terrace) occupied by members of Beat Rhythm Fashion, RIOT 111 and others. Located only 5 minutes from parliament the ‘Terrace scene’ as it became known was a key location from 1979–81 with house parties by touring and local bands. It's place in the local scene was considered prominent enough to feature as the principle location in Chris Knox's documentary on the Wellington Scene featured below.” Up The Punks

“The Terrace scene spawned several shortlived bands, only one surviving into 1982. The overall sound was harsh and confrontational with a strong emphasis on improvisation, contrasting sharply with the other centers' general revved-up dance-pop zeitgeist. Punk here meant anti-stardom, and an attendant militantly uncommercial musical stance; art as opposed to crowd-pleasing pop. There was much more of a psychedelic influence at work; the Cure, the Fall, Beefheart, PIL… all in a punk-fuelled witches' brew and available at Thistle Hall, Billy The Club, or someone's party.” Wade Ronald Churton 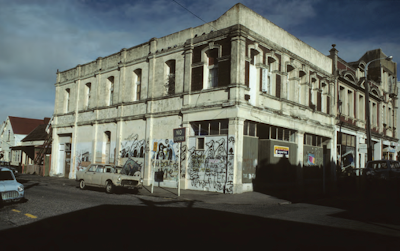 Thistle Hall at the top of Cuba Street in a photo dated 1980. 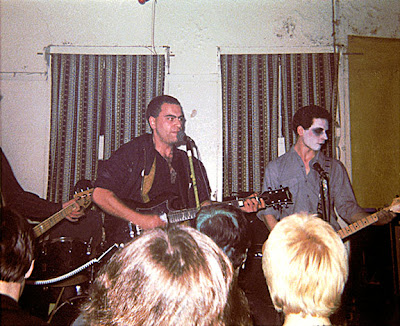 “LIFE was largely the conception of artist/guitarist/vocalist Michael Gallagher, with vocal and musical support from Samantha Swan and her guitarist brother Nick. In the early days there was also guitarist/bassist Adrienne Hally. The drum stool was taken by a succession of candidates with varying degrees of ability over the band's chaotic six month existence, notably Wellington's own answer to Sid Vicious, sheep-immolator Rhys Bassett. If spontaneity and loose jamming was the prevalent attitude amongst the Terrace scene musicians, then the envelope-pushing LIFE made a positive virtue out of non-practice.” Wade Ronald Churton 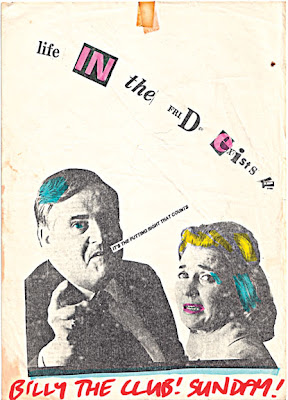 “In late 1980 LIFE recorded a number of original tracks at Sausage Studios, three of which feature on the **** (Four Stars) compilation of bands that made up the Terrace scene. Track one on this LP, Have You Checked The Children, is regarded by some as the theme song for this period of first wave Wellington punk/post-punk. The title references a 1970's slasher horror movie in which a babysitter is tormented over the phone by a unseen psychopath. LIFE's song neatly turns this around casting the children (who have all become ‘punks’) of Wellington's complacent middle class as the imminent threat to polite adult society. Wade Churton's 1999 book on New Zealand punk and post-punk from 1977–81 references this song in it's title. The group played in the Cuba Mall and Thistle Hall circuit during 1980–81 before splitting with guitarist Nick Swan continuing the use of music and ‘theatrics’ in New Zealand's first political punk band RIOT 111.” Up The Punks


Life In The Fridge Exists – Have You Checked The Children

Beat Rhythm Fashion
“This band is different – the two very British Birch brothers have spent most of their lives in Hong Kong and view New Zealand as a cultural wasteland. They don't even want to be associated with local bands. ‘We're a solar system band,’ Nino chips in. Even Kiwi drummer Glen whose nasal twang stands out from these toffee tones whispers ‘I hate New Zealand bands’.” Gary Steel 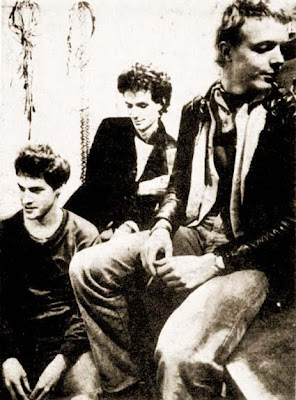 “Formed by brothers Dan and Nino Birch in 1980 Beat Rhythm Fashion made some initial sporadic appearances as The Westown Quintet and The Mixers before settling on the BRF moniker. Conceived of initially as a studio only project the band recorded two tracks for the **** (Four Stars) album released in August 1980. Living in one of the flats (no. 246) that made up the vibrant Terrace scene the brothers appear playing in a living room and interviewed outside by Chris Knox in his documentary on the Wellington post-punk scene.” Up The Punks

“BRF made wistful, introspective art-pop with complex arrangements and an immaculate sound (the production on their singles is uniformly excellent). They were a great deal less improvisatory than most of the other Terrace scene bands, but prone to preciousness and fussy arrangements which could become a minus (‘Art And Duty’, based on a Coleridge poem, sounds uncomfortably close to progressive rock).” Wade Ronald Churton

Naked Spots Dance
“Originating from a High School garage jam in 1979 (Stephen Norris, Phil Harfield and Geoff Smith), Naked Spots Dance formed in 1980 with an original line-up of Kate Walker, Stephen Norris, Phil Harfield and Jenny Leyland and were an integral part of the Terrace scene with three songs included in 1980s' compilation album **** (Four Stars). Heavily improvisational and accompanied by an ethereal vocal style NSD were regarded as one of Wellington's best bands of the time, releasing one album and two EPs between 1981 and 1983.” Up The Punks 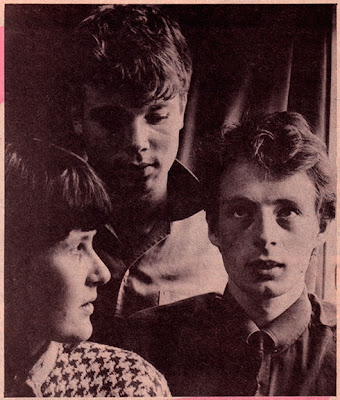 “The music the early band made was recognisably punk but different; short and spiky songs alternated with long, rumbling, improvised epics going well past the three-minute barrier. Lyrics were discontented, sullen and often ‘you’ scenarios. Norris and Walker achieved a fine musical rapport early on with their highly individual yet complimentary styles; raw, sparse and scouring guitar scraped over a warm, fluent bass which provided both rhythm and melody. They took their time over the music, and would not make a live appearance until well into 1980.” Wade Ronald Churton


Naked Spots Dance – Governed By You
Get it here.

Shoes This High
“With an anti-pop Public Image Limited/Pere Ubu/Fall sound, Shoes This High were one of the key defining outfits of the post-punk era. Formed around the hub of Hawkins and Walker in late September [1979], Hayward joined on vocals in November, and the band began to have the familiar drummer problem. There were one or two more in circulation by this time, however, and the band tried a few out, playing increasingly over summer, which was rich with parties, Cuba Mall and Thistle Hall events.” Wade Ronald Churton 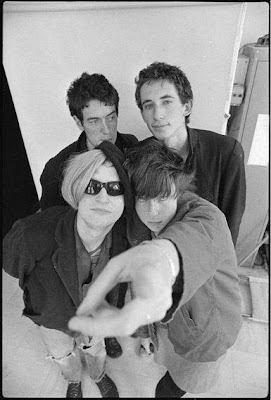 “The band were plainly punk-based (though influences like funk and even disco were coming through) but shared little of the form's clichés. Plummer and Walker locked together to form one of the country's finest post-punk rhythm-sections; taut, slippery, staccato and even funky (and remarkably reminiscent of 1980s' Features). Fused with Hawkins' menacing jangle and unusual melody-lines, the three were exemplary improvisers who could extemporise on a theme on a par with most jazz-rock hotel outfits. Shoes This High were working with much more exciting rhythms, however.” Wade Ronald Churton

“Unfortunately for Shoes This High, their music is just too extreme, too intense for the average Joe Public who frequents The Last Resort, Willy's Wine Bar etc. The band aren't prepared to compromise their music to gain commercial acceptance… A Shoes This High concert can be a pretty intense experience. Chris and Jessica lay down a solid, rhythmic foundation around which Kevin weaves patterns of jangling, often discordant guitar. Above all this Brent spits out the words as if his life depended on it. A lot of people I've talked to about Shoes This High complain that they can only take so much of Brent screaming insults at the audience in the songs.” Dave Maclennan 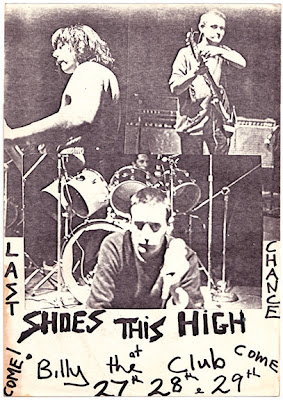 “I was living out in Wellington's suburbs. I was psycho. I was going off my tree. I just had the most violent thoughts about stuff.” Brent Hayward

“Inevitably this doctrine of ‘rile up the punters’, together with the band's singularly abrasive, difficult music meant that Shoes This High was always going to be the proverbial acquired taste, only ever appealing to a few fellow travellers and hardy souls (and very few hotel venues). From the word go they were destined for cult status for the whole of their 28-month existence.” Wade Ronald Churton 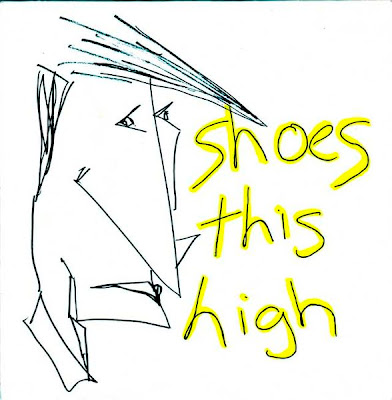 Shoes This High – A Mess
More info here and here.

Excerpts taken from the book Have You Checked The Children? by Wade Ronald Churton and the website Up The Punks – Wellington Punk Culture.
Posted by ONECHORD at 1:08 pm

We did indeed practice, well two of the band from memory... before the first gig... The others had to choose and then learn instruments, so couldn't make the practices. In our defence we also had a higher shopping without money for props ratio than most bands. Fridges don't grow on tree's!

View my complete profile
The real music is where it always
has been, in some sixteen year old's
bedroom where he or she is coming
up with the next revolution.